In a world rife with technology options and choices, ceiling fans have a thousand varieties. For more most of you first buyers, choosing the best and reliable ceiling fan can be a daunting task. However, windmill ceiling fans are one such option that you choose, sans a pinch of doubt. Windmill ceiling fan are undoubtedly the best.

Why Are Windmill Ceiling Fans Famous?

They Are Exclusively Handcrafted

If you already know, ceiling fans are basically produced in a bulk. The individual part is a mere piece on a conveyor belt which is assembled by a bored and an underpaid employee. No wonder average ceiling fans are mostly looked down upon for its degraded quality. This is where windmill ceiling fans come into action. Not only they are made to meet excellent quality standards but are exclusively handcrafted and are much better when compared to the usual ceiling fans. A good amount of concentration and attention goes into the detailing of the fans during the time of assemblage and manufacturing as well. This is what makes you vouch for a Windmill Ceiling Fan’s exclusivity.

The original and the initial windmills hailing from America were motor-less. They were basically driven by wind. However, the windmill ceiling fans have their integrated motor installed but are still powerful. The motors, to begin with, are reversible. You would also be happy to know that all the windmill ceiling fans are handcrafted in America and are made USA-made.

Windmill Ceiling Fans Are Thoroughly Assembled Before Delivering It to You

If you tried assembling flat pack furniture that just got delivered, thinking of putting it as a whole would be of no issues, you would simply love the idea that every windmill Ceiling fan is thoroughly assembled before delivering it to you. The design of windmill is quite complex with a variety of parts, and while you would any time be ready to assemble it yourself, it is always a better idea to get all the items fully assembled by the company itself and windmill ceiling fans companies are doing the exact thing, to put you out of hassles.

How Can The Size And Number Of Blades Have An Impact On The Cooling Effects Of A Windmill Ceiling Fan?

Each blade of a windmill ceiling fan, where there are about 15 blades, doesn’t necessarily have to work hard as compared to the average three-bladed fans. Each of the blades in a windmill ceiling fan carries out and share the workload and is thus able to disperse air in a better and an easier process.

When you have multiple blades on a fan, the pitch of individual blades can be flatter as compared to a three-bladed ceiling fan, as individual blades need to move only an insignificant amount of air. This followed by a slower movement of the fan, results in a soundless mechanism when running that can move air, as compared to the normal ceiling fans.

A ceiling fan with multiple blades like that of windmill ceiling fan is better at chilling the wind in a room than traditional ceiling fans. When windmill ceiling fans are used in conjunction with AC, it would allow you to increase the thermostat of an air-conditioner and still retain a comfortable cooling effect. This alone would be efficient enough in saving you a thousand bucks every year.

Also See: Amazing Sunmica Design that you will love

How is Windmill Ceiling Fan Beneficial? 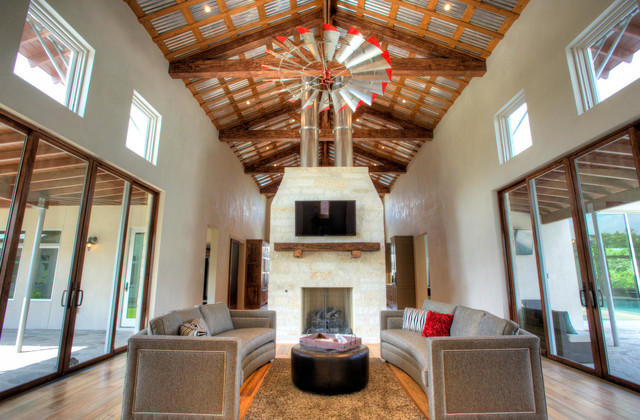 You can install windmill ceiling fans inside barns to cool your horses off during the hot summers. They are also quite cost-friendly than air-conditioners, especially if your barn is large with a great amount of volume. Windmill ceiling fans circulate air properly to remove the stale and unhealthy air and invite fresh outdoor air, or circulate the existing air, in a way, so as to keep the environment of the barn fresh. Stagnant air in the barn is said to invite diseases and infections for the horse.

The Windmill Ceiling fans are just the appropriate ceiling fans for the barns because they are designed with multiple blades, which rotate air effectively. Also, windmill ceiling fans tend to move the air at low velocity, which means they help you save energy and money as well.

Windmill Ceiling Fans are always the winner, courtesy of their cost-friendly and effective mechanism. Windmills are quite easy to clean and include no cords or wires and have about 18 blades, which cover a diameter of 66-inches, or feet 6 inches